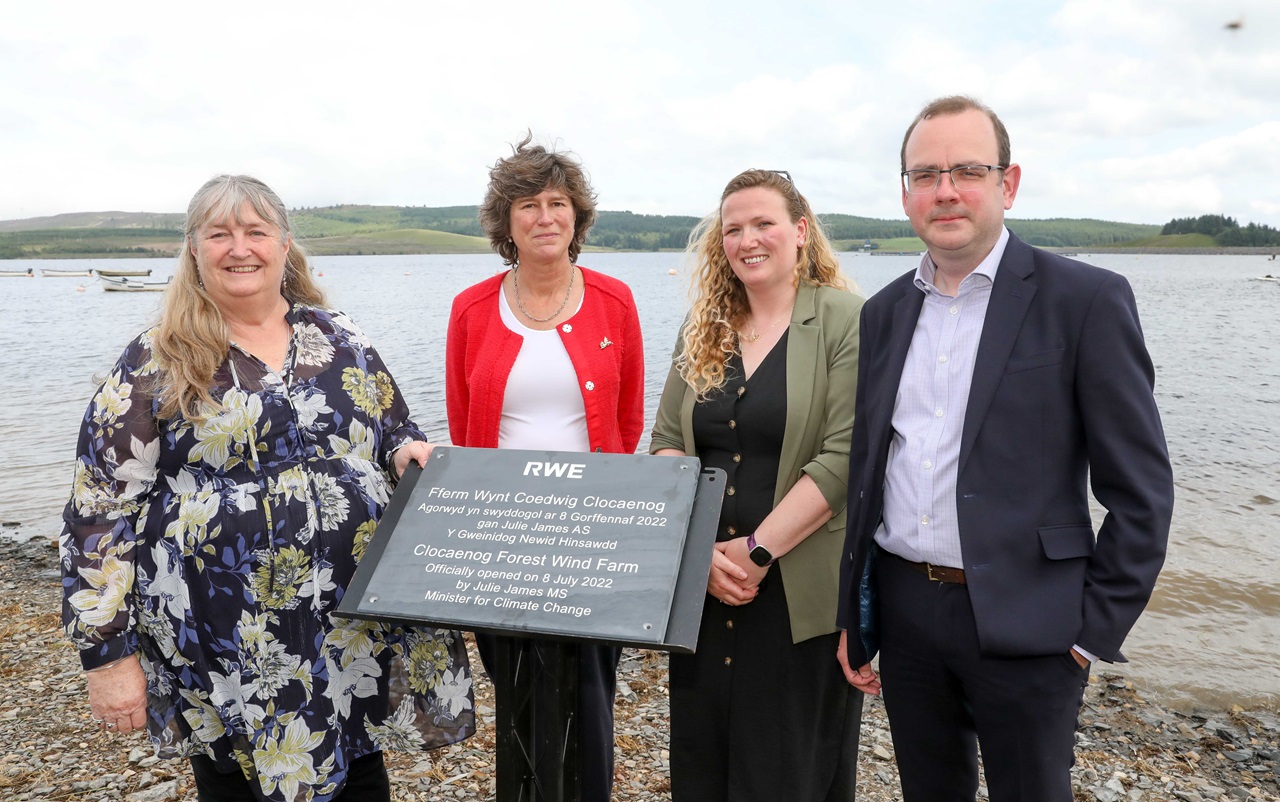 Clocaenog Forest Wind Farm, at 96MW, is the largest onshore windfarm in RWE’s UK fleet, and is located on the Welsh Ministers’ woodland estate, on land managed by Natural Resources Wales. Although the wind farm has been in operation for over a year, COVID restrictions have prevented RWE from celebrating the achievement.

The wind farm is located near Denbigh, and consists of 27 turbines, capable of  providing renewable electricity equivalent to the needs of 63,800 UK homes, and was completed in 2020 with construction taking  around 18 months. The principal contractor was Jones Brothers Civil Engineering UK, which is headquartered less than 10 miles from the site and well-placed to source local suppliers during the delivery of the project.This local contract was worth £20m, provided work for 60 employees together with 14 apprentices and trainee engineers.

”Climate Change Minister Julie James said: “It was my pleasure to officially open RWE’s Clocaenog Forest onshore wind farm. Onshore wind already accounts for 39% of our renewable electricity generation in Wales but we have big ambitions in this sector.

We have the vision for Wales to become net exporters of renewable energy in a way that supports the economy and retains value in Wales. We want to regenerate the industry so that we bring benefits to our communities and create skilled jobs.

We have already made great strides in making net zero a reality in Wales. We want an electricity network which is smarter, greener and capable of supporting a low carbon future, which meets the future needs of our communities and people. Providing the best long-term value for Wales.

RWE are a large and important developer in Wales, we look to them to set a high standard among the developer community and are excited to see the difference they can make to the future of renewable energy in Wales.”

Upon completion in 2020, the RWE’s Clocaenog Forest Wind Farm began delivering a £768,000 annual community investment fund into the local area.

The fund isindependently managed and administered by Community and Voluntary Support Conwy (CVSC) on behalf of local communities in Conwy and Denbighshire. It aims to establish a long-lasting legacy by delivering life-changing benefits for the neighbouring communities. So far, the Clocaenog Forest Wind Farm Fund has invested £1.181m into 96 grants, creating more than 24 jobs and safeguarding a further 62 in the process.

Cathal Hennessy, Head of Onshore Development UK & Ireland said: ”RWE ensures that it works closely with local communities throughout the development of renewable projects; to ensure there is a long-lasting benefit from the delivery of its projects to the local area, as well as to the environment.”

CVSC Fund Manager, Esyllt Adair added: “We are looking forward to seeing the positive longer-term impacts this community fund will have for the local economy. We would urge businesses, groups and organisations who are interesting in applying to the fund to get in touch with us to discuss their projects or ideas as early as possible, so we can support them through the application process. This is a fantastic opportunity, and we want to work closely with local people to maximise the impact of this really significant investment.”

Lyndsey Rawlinson, NRW Head of North East Wales Operations, said: “Clocaenog Forest is an exemplary site that clearly demonstrates how environmental, social and economic benefits can be realised through the sustainable management of the Welsh Government Woodland Estate.  The Clocaenog windfarm is a great example of Natural Resources Wales (NRW), Welsh Government and RWE working together to help address our climate emergency while delivering significant biodiversity and community gains in the process. It has been a huge collective effort and one that NRW is very proud to have played a key part in.”

The 27 turbines at Clocaenog Forest Wind Farm add to RWE’s impressive UK portfolio of over 4,800MW (2,790MW RWE pro rata share) of renewable generation capacity in Offshore Wind, Onshore Wind, Biomass and Hydro. The UK plays a key role in RWE’s strategy to grow its renewables business and to become carbon neutral by 2040. RWE is also Wales’ largest renewable generator, and is set to grow its Welsh portfolio with the development of Awel y Môr (the Gwynt y Môr extension) the company is also in the very early stage development proposals for around 300MW of onshore wind capacity.